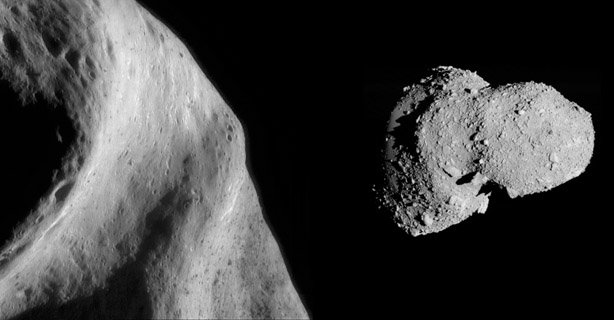 Asteroids Eros (left) and Itokawa (right). Itokawa is believed to be a "rubble pile". (Images are not to scale).

Asteroids can be single large rocks, or they can be collections of rocks loosely bound by their mutual gravity... "rubble piles".

How do we know?

One way to find out is to send a mission to examine the asteroid, as the Japanese did with Itokawa. But there's an indirect way of figuring this out, without flying to the asteroid. Asteroids are heated by the Sun, and as they re-radiate the heat they can spin up. It's called the YORP effect, and it isn't very fast. It can take hundreds of thousands of years to significantly change an asteroid's spin, but it means that over time some asteroids will start to spin faster and faster.

So what happens when a bunch of rocks that are only held together by gravity spin faster and faster? Eventually they fly apart. It turns out that a lot of asteroids spin at just below that critical speed. That suggests they're rubble piles. YORP spins them up until part of the asteroid flies off, slowing them down again.

Why do we care?

Think of what would happen if an asteroid were headed toward Earth and you try to push it or blow it up. It might work for a single, monolithic rock. But moving a rubble pile could be like kicking a pile of leaves. You'd need different strategies, and you'd probably have to do it very slowly, over long periods of time, to avoid breaking up the asteroid into a swarm of uncontrollable rocks.

A quick game: move the rocks off the screen before time runs out.

A longer, multi-level game: save Earth from the asteroids!