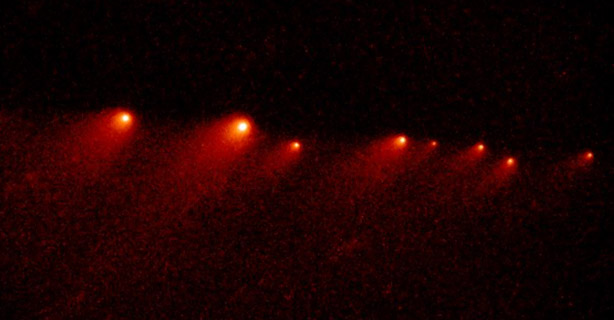 This comet hit Jupiter in 1994. It started out as one object, but Jupiter's gravity pulled it apart in to the "string of pearls" you see in this image taken by the Hubble Space Telescope.

At the time it was estimated that an impact like this might occur every hundred years. But an amateur astronomer observed a second impact just five years later, in 2009.

You know the basic solar system structure: rocky terrestrial planets close to the sun (Mercury, Venus, Earth, Mars) and massive gas and ice giants far from the sun (Jupiter, Saturn, Uranus, Neptune). Between Mars and Jupiter is the Asteroid Belt (there are asteroids in other parts of the solar system too, but most are in this "Main Belt"). The Asteroid Belt is actually very empty: the total mass of all the asteroids there is only about 4% of the moon's mass.

These collections of small, icy bodies are remnants from the formation of the solar system. When their orbits are shifted by other objects they can move in to the inner solar system, becoming comets.

Knowing where they come from gives us a way of understanding the differences between asteroids and comets.

Asteroids are rocky. They come from the inner solar system, where any ice would have been baked off by the sun long ago. Their orbits are fairly predictable. With enough observations, we can track down the big ones and determine if they're threats.

Comets come from the outer solar system. A lot of their mass is ice, and as they come close to the sun that ice evaporates and creates the comet's tail. That ice also makes them less dense than asteroids, but they tend to be moving faster by the time they near Earth. Some comets have predictable, periodic orbits (like Halley’s comet, which returns every 75 years). But objects in the outer solar system can be jostled by each other, or even by passing stars, and get knocked in to new orbits. That means new comets can arrive in the inner solar system -- something we have no way of predicting ahead of time.

It's not all black-and-white, of course... objects from the outer system might be rocky. And some asteroids seem to have a little ice. But overall this is good way of thinking about them.

A number of comets and asteroids shown to scale. The smallest of these is still several times larger than a football field. Original image courtesy of The Planetary Society.