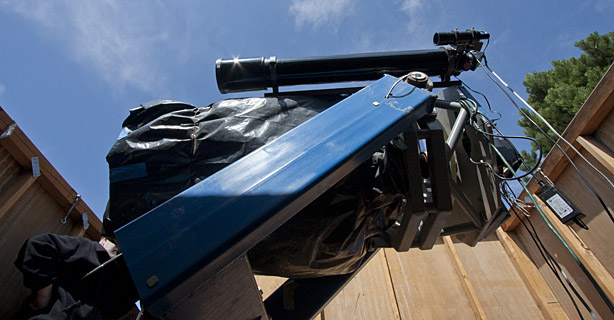 Not Your Usual Observatory

This telescope is part of the Palmer Divide Observatory: a backyard observatory owned and operated by Brian Warner. Brian is one of many backyard astronomers who actively participate in asteroid research by using their telescopes to track and measure near Earth objects.

Things you can learn from a point of light

Asteroids are small (compared to planets) and far away. As a result they're generally only visible as points of light. But you might be surprised at how much you can learn from just points of light.

If you measure the brightness of that dot over time, you can learn a surprising amount about the asteroid. If you watch it long enough for the brightness changes to repeat, you can determine its rotation speed. If you take a lot of measurements from different perspectives (as Earth and the asteroid move in their different orbits around the Sun) you can even estimate the asteroid's shape.

Have some time on your hands?

This is where the backyard astronomers come in. The big research telescopes can't spend all their time watching asteroids, but small, commercial telescopes are powerful enough to do the job. Most ground-based light curve data today comes from people's backyards.

The WISE spacecraft also collects light curve data, but it's using infrared light instead of visible. The difference? The amount of visible light a rock reflects from the Sun depends on how bright or dark the rock is. That means you can't tell if you're looking at a small bright rock, or a large dark rock. But the infrared light is a glow coming from the asteroid itself as the Sun warms it. With the infrared data you can figure out how big the rock actually is.

Can you identify an asteroid by its lightcurve?

So how does a backyard astronomer end up doing asteroid research? Here's a short video on Brian Warner's Palmer Divde Observatory.